Belated Summary of the 2012 Asian Continental

First of all I want to apologize for neglecting my own blog. It's been more than 3 months since I posted the last entry here. A good 3-months actually which is worthy enough to share, especially about my chess life. So after my bad performance in Australia last April that fairly took much of my rating away, I've made a good comeback in the following month by winning the 11th Asian Continental that was held in Ho Chi Minh City, Vietnam on May 4th-13th, securing a place in the 2014 Women's World Championship, and becoming the first Indonesian female to compete in such a glorious event. I would like to happily announce here that it was my highest achievement in chess so far. To top the Continent among those giant players from the notably strongest countries in Asia, namely China and India, is merely one's blessing that one could only wish for. Going there as the 19th seeded with a 2288 elo rating was simply removing my name from the favorite list. Being a 2300ish player for the last 4-5 years and suddenly dropping to 2288 was not that easy for me to accept. I wrote about it once as my status on Facebook that in order to jump higher, you have to bend your knees first which received a lot of positive comments to encourage me to get over the sadness and wishing me to do well in the very next event. And eventually yes, things turned to be good for me, psychologically, when I changed my mindset that to be an underdog was actually an advantage in such a situation and resulted in a lighter feeling during the games against much higher-rated opponents in Vietnam. That made me think that to have lost lots of rating in Australia was not a bad idea at all, but of course I didn't purposefully do it :) 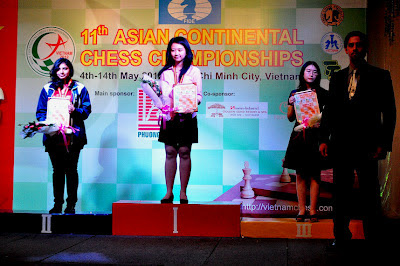 What a fool I would be if I forget to name those who have helped me to go through the process. Therefore, I can proudly say that I'm so thankful to have a family like my own right now that never get tired of motivating me in all things. Papa, Mama, and my siblings: Kaisar and Diajeng, I love you all so dearly! :)

And to my closest ones: Junta, Lucy, Wei Ming, Gladys, and some others that are too many to mention here - for morally and technically helping and supporting me both in life and chess, and for just being there for me, thank you! :) 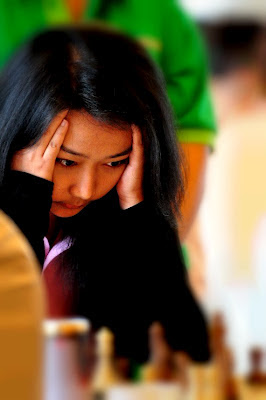 And now readers, please do enjoy the game that I selected to be annotated by myself from the aforementioned tournament.